In Business Strategy, there are three different sources through which “Strategic positioning” emerges:

1, Serving few needs of many customers

3. Serving broad needs of many customers in a narrow market

Be it an enterprise or a movie star, it is essential to identify and establish your strategic positioning in order to be successful.

Ajith has figured out over all these years that SP2 works best for him. Serving broad needs of few customers (the few customers here being his die-hard fans, who are quite a few).

This is the reason why, of late, most of his films are a huge hit at the Box Office but receive mixed reviews from the audience. Vedalam is no exception.

I loved it. In and out. I was shocked to see 1.5-2 ratings from big media houses for the movie.

If Director Siva wanted to make a commercial movie that would be a Diwali Treat for Thala fans and a good entertainer for the neutrals, I’d say he has exceeded expectations in his job.

I was bought the moment I saw the Trailer for the movie with Thala roaring “Therikka Vidalaama” with a bleeding mouth. 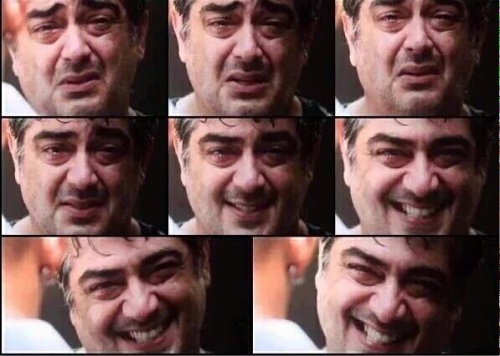 There are more than 5 goosebumps moments for Ajith fans where Thala just owns the screen. Not sure if there are other actors who could have pulled off these scenes. Vintage Ajith (of the Villain league). 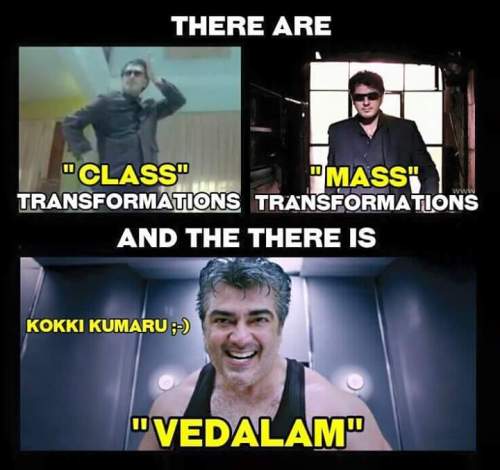 I’ve conceded in the past that I’m now an Anirudh fan. Loved his RR in Naanum Rowdy Dhaan. Does a great job in the mass scenes in Vedalam too. Songs are a let down though.

Shruti Haasan wasted yet again. Lakshmi Menon has done a role to remember.

One consolation of watching Maari is the realization that there’s at least one person apart from me who likes to roam around wearing flowery shirts. 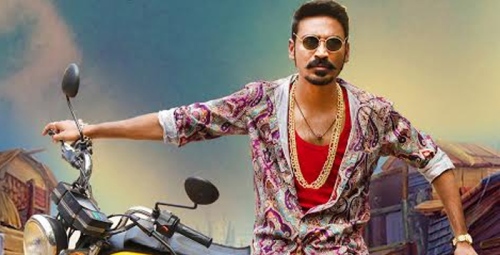 Dhanush in & as Maari

I became a Dhanush fan in 2011 after watching Aadukalam. I liked few of his earlier movies too, including Polladhavan, Yaaradi Nee Mohini, Thiruvilayadal Arrambam and the likes. With 3, Mayakkam Enna and VIP, he was right up there in my list after Rajni, Kamal and Ajith.

Maari is however proof to the fact that if you choose the wrong script, there’s no point acting your heart out. Something which Thala Ajith does a lot.
Some thoughts about the movie I tweeted right after watching the movie, below.

Dhanush can pull off those slo-mo walks in style. Just that there were too many of them in 150 min.

Director Balaji could stick to scripts like #KSY. #Maari

Robo Shankar and the other sidekick were standouts. Laugh riot. #Maari

Santhosh Narayan would have done justice to such a script, compared to Ani who over-abuses the electric guitar. #Maari

Vijay Yesudas sings really well. He should stick to it. #Maari

It’s been a long wait for Ajith fans, past 3-4 months; from the time #Thala55 was titled “Yennai Arindhaal” to the time the movie released, on Feb 5. Everything related to the movie became a national trend on twitter – the title release, motion poster, teaser, single, trailer and then the movie itself. Not that they all deserved to trend; just shows the number of fans this man has.

Staying outside Tamil Nadu has its benefits, like getting tickets to watch a Thalaivar (Lingaa/Kochadaiyaa) or Thala movie (Yennai Arindhaal) on the first day. Felt completely at home when “Ajith Kumar” appeared on the big screen with a ear deafening roar from the audience. I am not talking about Kasi Theatre in Chennai. This happened in PVR (Gurgaon), more than 2200 km away from Chennai. 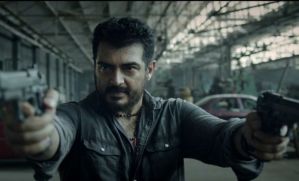 That title card was pretty much Ajith’s presence in the entire movie. There was no Ajith after that. It was just Sathyadev I.P.S., the character he played (rather lived) in the movie. Yennai Arindhaal, I realized, isn’t a mass movie, made just to cater to Ajith’s die-hard fans in Tamil Nadu, like a “Veeram”. It wasn’t meant to be.

It’s a fitting finale to Gautham’s COP Trilogy, after Khakha Khakha and Vettaiyaadu Vilayaadu. Ajith just oozes class (like he always does) in all the different shades of Sathyadev. It was heartening to see Ajith, the actor throughout the film. He just nails it, as a righteous COP, bereaved husband, caring father, and a man seeking revenge. There are two things in this world that don’t go down – one is age, and the other is Ajith’s screen presence.

I’ve been a fan of Gautham Menon’s type of movies. He’s created a style of his own. The heroes adore their dads and see them as role models, heroines are portrayed as independent, people generally tend to use English a bit more than normal Tamils would do, etc. Yennai Arindhaal has all these elements, which is why, like his earlier movies, it might not reach out to B and C audiences, in specific.

Gautham has got the casting bang on in Yennai Arindhaal. Well, it takes two to tango, and Arun Vijay has played one of the best negative roles in the past year or so. His phone conversations with Ajith in the second half is one of the most riveting hero-villain duels in recent times. After seeing weak Villains in Shankar’s “I” and Thalaivar’s “Lingaa”, it was more of a relief when Gautham Menon gave us Victor (Arun Vijay). Welcome back to Tamil Cinema, Arun Vijay.

Bottomline: Another episode in a Police officer’s diary which you just cannot miss.

I distinctly remember that day, some four years ago in Coimbatore when I persuaded few of my mallu friends to join us for “Asal”. I told them Thala will not disappoint. That day, unfortunately, he did.

The story can never be more predictable. Hero has a happy family. Villain (having a huge mustache and dishevelled hair) does all the wrong. Hero can do no wrong. Thugs fly like ping pong balls. Hero triumphs and wins everyone’s heart.

But the fact that Ajith dons the role of Hero makes a lot of difference.

Other than the Super Star Rajnikanth himself, there’s no one ( I REPEAT, NO ONE) in Tamil Cinema who has a screen presence as huge as Thala.

Not Vikram. Not Suriya. Definitely not Vijay.

The slo-mo walk of Ajith as his face is revealed from under the umbrella in one of the scenes got a ear deafening roar from the audience. 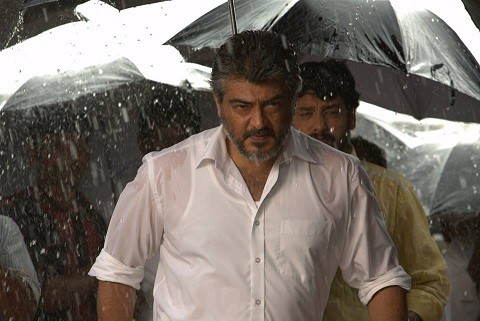 Awesome scene in the movie

There were many other scenes (backed by very good re-recording and camera work) which other actors can pull off only in their dreams.

Veeram also witnessed Ajith in a light-hearted role (at least for most parts of the movie) after many years. Billa, Mankatha, Arrambam, Asal all saw only the serious Ajith.

The comedy track involving Santhanam, Tamannah and Ajith’s family in the first half is hilarious. Thambi Ramiah tries his bit in the second half.

DSP’s songs gave us a break to catch up with friends. Barring the intro song and the song by Adnan Sami, other songs aren’t even hummable. Take nothing away from DSP in the re-recording though.

Some punch lines by Thala were very deep. To quote one, “Unna suththi irukkaravangala nee paathukitta, mela irukkuravan unna paathupaan” (If you take care of the people around you, God will take care of you).

If Tamil Cinema is an empire, then Ajith is its undisputed king and he is here to stay. Veeram is enough proof.